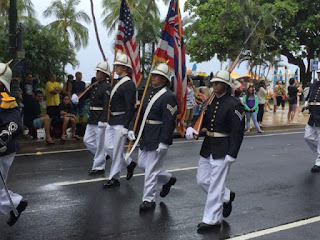 The weekend had 2  different parades, one on Saturday and the other on Sunday.  The parade on Saturday celebrated Kamehameha day while the one on Sunday honored the relationships between Asia and Hawaii.

The picture to the left is of the Royal Guards, a group who guarded the Kings originally.  Now they are strictly ceremonial and they come out to perform at various functions.

They have a long and wonderful history. 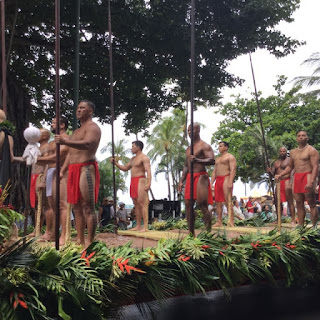 Since the parade celebrates Kamehameha, there has to be a court similar to those of the times when Kamehameha united all the islands.  At the back of the float is the man who is representing the king.

You will find many Hawaiians are still bitter about the way the United States took position of the islands.  I'll go into the history another day.  I grew up in Hawaii and it was something we all knew about.

This parade follows a route which includes Kalakaua street named after King David Kalakaua who encouraged dance and music. 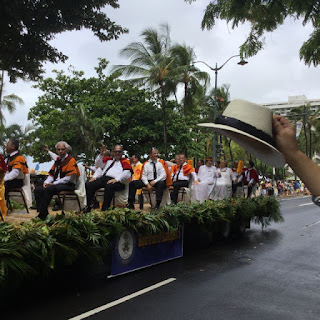 This particular parade is not complete without older Hawaiians who are part of the culture. This group is the equivalent to the pioneers of Alaska.

I stood next to a gentleman who moved to Hawaii from Germany.  He knew several people on the float who are his neighbors.  He'd wave at them, yell a hello.

If you've ever been to Waikiki, on Kalakaua street, I stood across the street from the big Banyon tree by the Kahio hula mound.  The hula mound is regularly used by various hula schools around the island.  During the Pan Pacific festival, it is one of the stages for the performances of hula. 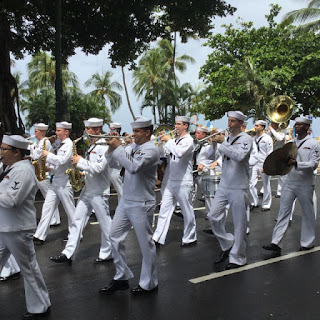 No parade is complete without several marching bands.  The band at the front of the parade is always going to be the Royal Hawaiian band, and institution since the 1850's.  They marched in both parades.

This band is one of the local navy bands who added music to the joyful celebration.  I believe they play the Washington Post March by Sousa was they passed by me.  Side note: they keep all the coconut trees trimmed of fruit so no one gets hurt other wise they might sue the government. 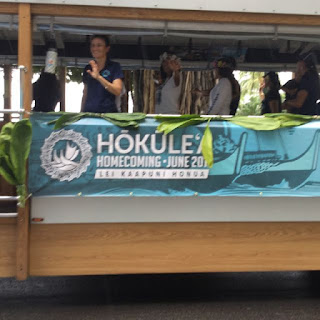 The Hokulea is a group who built a traditional boat using traditional methods, they sail around the pacific.  They use the same materials as the polynesians who came to Hawaii originally.

The current boat is due in sometime this week after traveling for 3 years around the Pacific.  They are expecting over 50,000 people to meet it when it finally arrives back in Hawaii.  If I had known about this before I booked my trip, I'm not sure I would have changed my plans.

I am going to try to find it online where I should get a better view but I know people who plan to be there.  It is quite a accomplishment to sail the Pacific using ancient methods. 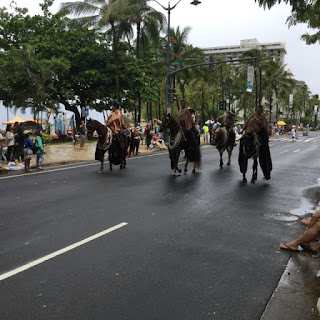 Each and every island is represented by a prince or princess and court.  All ride beautifully decorated horses while the riders wear typical Hawaii wear.

The women wear a fitted top with an extremely long skirt designed to cover their saddles, legs while looking quite feminine.

The men wear jeans, boots, and checkered shirts, typical of ranch hands.  The hats are not the typical cowboy hats instead they are woven out of a local leaf. 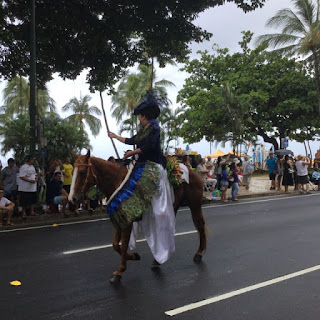 This is a picture of one of the female riders in her outfit.  Note the horse is wearing a beautifully decorated with flowers, cloth, so as to be uniquely Hawaiian.  What is hard to see is the beautifully done hair complete with more flowers, shells, cloth, so she matches the horse.

I don't know how long it takes the women to get ready but I'm betting their hair is professionally done because its so beautifully done and so precise, they cannot do it themselves.

You can see how well the long skirt covers the rider and the actual saddle.  I love looking at all the decorations. 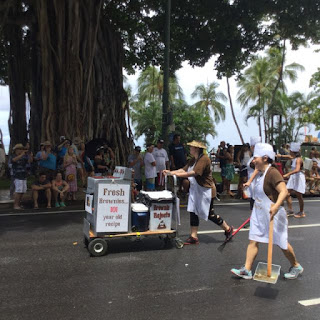 Since horses are live, they poop and every group has its own personal pooper scooper group to clean up the mess left by any horses.

I love this particular group because they dressed up as bakers complete with oven and add for brownies.  This group had a bit more humor than others.

Most groups wear tshirts announcing which island they represent.  I saw a couple families with children as part of the cleanup crews.  This is a traditional part of the parade.  At the very end of the parade several street sweepers roll down the street cleaning anything these groups miss. 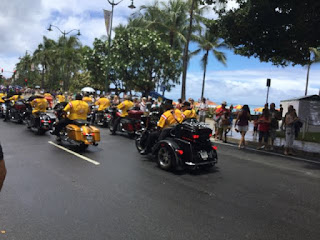 Television had the Sons of Anarchy but here they have  tyhe Sons of Hawaii, a motorcycle club who regularly participates in this parade.  The last motorcycle has a passenger who is too old to ride a cycle on his own but is still part of the club.

It wasn't too much longer after this group, the parade ended.  I did did not get a good shot of the Indianapolis Police who performed wonderful things on their motorcycles.  The most impressive trick was the two men who stood on their vehicles as they rode towards each other.

The very next day the Pan Pacific Parade happened.  It showcased so many different groups from various Japanese tourist agencies, to the Hawaii Okinawan society, to the Hawaiian Koren Farmers Musical Club to the visiting music groups.  It was awesome. 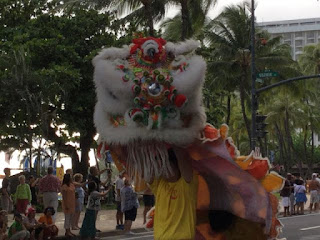 This is one of the Chinese dragons who play a key part in Hawaiian life.  I remember Chinese New Year celebrations with lots of dragons.  There is always a drum corp accompanying the dragons.

You'll see a few more dragons a bit later on.  Every dragon in the parade had one person holding the head while another moves the back end.  Men change out on a regular basis. 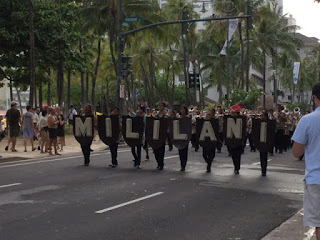 Again, what parade is complete without marching bands.  This one had several visiting bands from the contiguous United States.  Two of the bands played "On Wisconsin" which is something you might play at a football game.

It was almost jarring after hearing oriental music but it was still a nice touch.  For most of the bands, parents ran through with bottles of water every time they stopped.  I think it was a but warmer and more humid than they were used to. 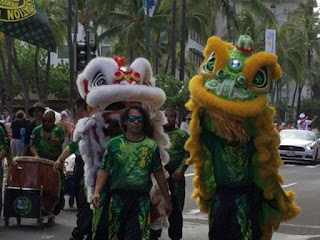 More Chinese dragons.  This group had two dragons on my side of the parade.  They pranced and even stopped for pictures.

I hate to use the word but these guys are cute.  I adore seeing them prance down the road.  The children had a blast when they came bye. 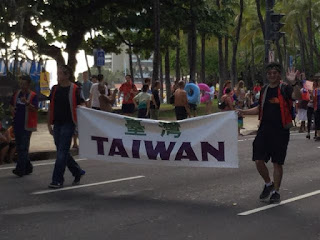 Every group came with a sign letting people know what group they represented.  Some groups just marched while others danced their way down the road.

The parade included teenage and twenties dance groups who perform a nontraditional dance.  It was fun watching a young man who used his body to control the sliding of a ball.  It was spectacular.

One group combined two sticks with a hip hop type dance.  It reminded me of an updated version of a dance I learned as a teenager. 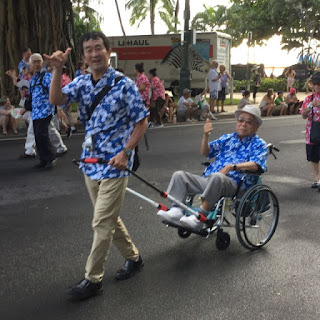 These two men are part of a huge group from Japan.  This is towards the end of the group showing even the elderly participate.  This was just the first of several wheelchairs in the group.

I believe this had the largest number of participants in their group.  As far as I know, they participate every year.  The U-haul truck in the background is tearing there to pick up the equipment from the festival.  The parade is the last event in the festival. 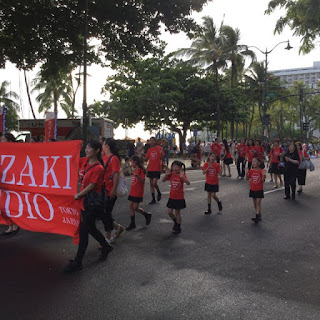 This studio appears to prepare girls to perform in public,  The young ladies would sort of dance while singing their way down the parade route.

They burst into the song from Annie about not being fully dressed without a smile.  Based on the name of the group, I suspect they are based in Japan.  Certain types of entertainment are more popular over there.

The younger ones stole the show especially the first one behind the banner carrier.  She has one of those personalities where she did just a bit more than the rest, kicked a bit higher. 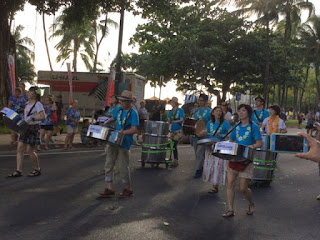 I had to include this group.  What made them stand out was their Caribbean style music.  Their music has people on the street bouncing in time with them.

Their music took you away from Hawaii to the Caribbean.  The musicians definitely enjoyed themselves as they bounced along the parade route. 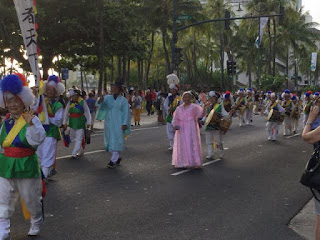 This final picture is of the Hawaii Korean Farmers Music Association.  There were two small children in front of the banner, both dressed in traditional Korean outfits.

I checked the internet.  This group began back in 1996.  The band uses only 4 traditional instruments, each representing a sound of nature.

I hope you enjoyed the descriptions and pictures of both parades.  I actually took like 200 for each parade because I enjoy looking at each one and remembering, especially during winter when its cold and snowy outside.

I hope you enjoyed this.  Please let me know what you think.  Tomorrow, the last installment.  I'll be home by the time you read this.  Next trip is the beginning of July with photos from Phoenix and Puerto Rico.
Posted by Lee MacArthur at 9:00 AM

Email ThisBlogThis!Share to TwitterShare to FacebookShare to Pinterest
Labels: 2 Parades