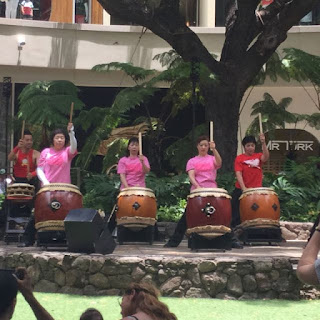 This year, one of the stages was at the new International Market stage and was used for the first time ever as part of this event.

What made this different is the workshops provided by each group.  The first group were drummers who performed in the synchronized form common to Kyoto style.

They performed a beautiful drum song before inviting seven members from the audience to  learn some basic rhythms.  At the end of the lesson, two people came up to play a short tune on flutes while the students played along.  They repeated this before everyone came back on stage and played the whole tune.  It was beautiful and rocked. 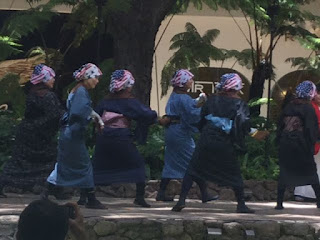 This group looked like this as they came on but as soon as the music started, it became obvious they danced to a pop style music.

The dancer rocked and rolled across the stage with their booms.  It was obvious they practiced to get the group togetherness. Once done, they did a wonderful dance with small clappers.  It was awesome.  This group invited people from the audience to come up and learn the chorus to the dance. 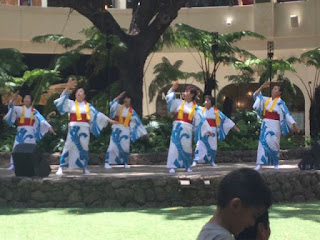 This group performed the more traditional dances you picture when you think of it.  The movements are delicate and fluid.  The steps are small but each movement is understated yet powerful.

They danced two dances before inviting the audience up to learn a dance done at local gatherings called the "Bone Dance."

I got up to try it.  I discovered I did not need to know Japanese because it was taught using hand gestures and pointing.  Fortunately, the phrases were not that long so it was fairly easy to learn.
I did not get a picture of me because I was dancing but a friend did so maybe I'll get a copy from him. 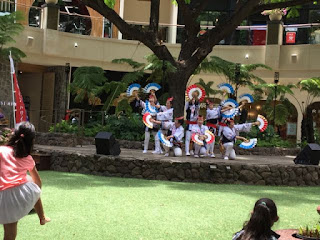 This group of women dance with double sided fans.  One side was red, the other blue. They dance to a drum type music complete with choreography as they moved across the stage in beautiful patterns.  At the same time, they moved the fans around various patterns.

As soon as the groups invited audience members up on stage, children ran up to learn.  To them, it was a chance to play.

All four groups were in the parade later in the day. 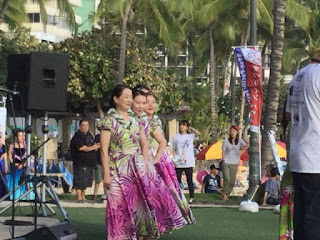 This is one of the Japanese groups from one school.  They performed on the Kuhio Hula mound at the edge of the beach.  There was a "judge"? who commented on their presentation, outfits, and interpretation.

What you don't see is the audience sitting in a small grassy area between the stage and the commentator.  All introductions were done in both Japanese and English. 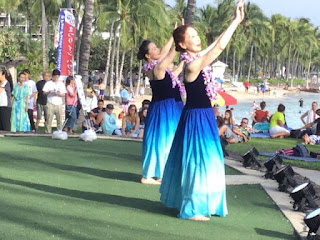 This school only had 5 members including the teacher. I love the way the outfits go from a deep night to dark blue to the lighter blues.  The color gradation reminded me of sunrise in Alaska.

This was taken in the early afternoon.  If you look carefully you can see the open ocean of Waikiki beach with some of its swimmers.  Yes the street is that tree lined. 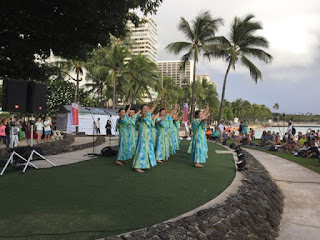 This is a third group who danced during the 5 hour time for performances.  When the sun sets, there are tiki type lights which burst into flame, making it look like it mysterious.  There are footlights in front to light the dancers.

You see a few of the hotels and the big tree in the upper left corner is part of the giant Banyon tree.  It's been there forever as far as I know.

This group when they got to their third dance, placed two rows on the stage and a third row in front on the walkway you see.

Next week, I'll be back to normal as I'm home in Alaska again.  My next trip is in a couple weeks when I head off to attend two conferences and will have a bit of time to get general pictures of places.  Have a good weekend.
Posted by Lee MacArthur at 4:00 AM

Email ThisBlogThis!Share to TwitterShare to FacebookShare to Pinterest
Labels: 4 stages.