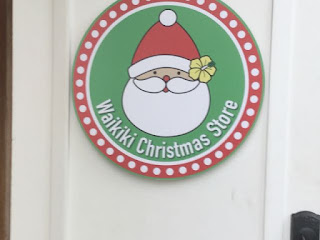 The other day, I decided to wander around Waikiki, checking out stores.  I decided to wander along the side of the street towards the Apple store because I had a technical question and I seldom bother with that side.   Being from Alaska, I knew about the Santa Claus House in North Pole Alaska.  Its not THE North Pole but a town near Fairbanks which celebrates Christmas year round.  Apparently, there is a place in Waikiki known as the Waikiki Christmas Store.  It celebrates Christmas year round. 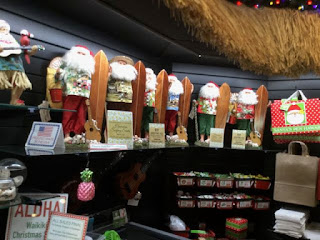 Its not a large store, just one in a row of shops but it does stand out with its festivity. The sales people at the store state this is where Santa comes to take a holiday.  You'll see the Santa dolls dressed in their Aloha shirts with surfboards.  These guys are found in the back corner near the cash register.  They'd never heard of the Santa Claus House but one of the other people in the store had been there so it was cool.  If you look carefully, you'll see a pink pineapple.  True story here, there is a tree in Hawaii whose fruit looks similar to pineapple plants so many tourists think they grown on trees.  They don't, they actually grow on a plant rising from the ground. 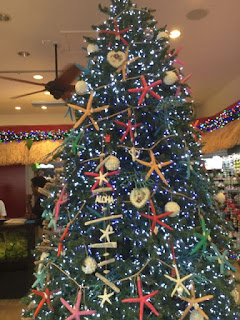 Of course what Christmas shop is complete without the tree we associate with the holiday.  This tree is decorated more in the Hawaiian style with see shells, star fish and other local decorations.

The Hawaiians have their own version of the 12 days of Christmas which starts "On number one day of Christmas, my Tutu give to me."  Each item was local such as on the 5th day, you got 5 big fat pigs instead of gold rings.  No one saw the gold rings. 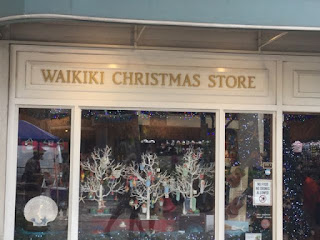 This is a shot of the outside so you can see what it looks like.  The trees in the window are definitely quite festive.  I am honest, in that I did not purchase anything because I had limited space and I've already purchased the coffee for my parents, the macadamia nuts for assorted friends, hair clips for others, hair sticks for me, and I still have to get the Malasadas but I have to get those on the day I leave so they are relatively fresh.

I think the next time I come over, if my parents are with me, I'm going to take my mother with me since she loves this type of thing.  When she visited me in Alaska, she had a blast visiting the Santa Clause House.  She even sat on Santa's lap there.  I know she's going to have to see this shop.  She'll love it.  I hope everyone is having a good week.

Let me know what you think.  I love exploring.
Posted by Lee MacArthur at 4:00 AM

Email ThisBlogThis!Share to TwitterShare to FacebookShare to Pinterest
Labels: Christmas in Waikiki.