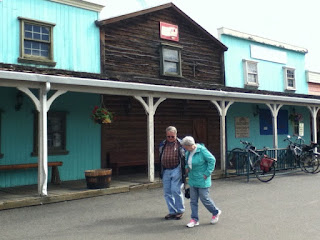 Pioneer park is actually a large piece of land with a village on it composed of heritage buildings relocated from other parts of Fairbanks.

This picture is the area near the museum.  Most of these buildings have different business names but it houses a museum and a video room with films about the gold rush. 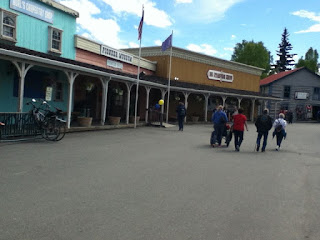 This set of buildings are at one end of the property.  Just behind it is the railroad which circles around the property.  I'll have photos of those on Monday.

I took these pictures after the memorial day concert.  See the last building in the row.   The one just in front of the woman in the light shirt?  Its the same one in the picture below. 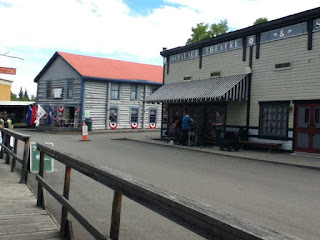 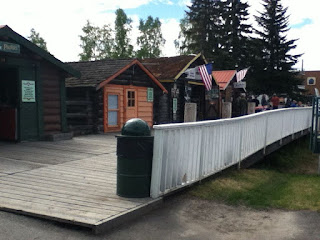 The building is a nice two story gift shop which sells edibles people can take outside and eat at the tables in the front.  The road between that building and the saloon theater heads back and around.

The saloon theater doesn't open till later in the evening when they run a variety of shows high lighting the gold rush.

If I'd turned right at the museum instead of going straight, I'd be turning down this row of cabins.

The first one in line is a portrait studio.  You know one of those where you dress in costume and have your picture snapped.  The final product is a sepia color so it looks like one you might have had long ago.

The two places by the flags are food places.  One serves Greek and American food while the other is strictly American.  I've never eaten at either place.

If you look to the right of the fence you'll see this the Lavelle Young. 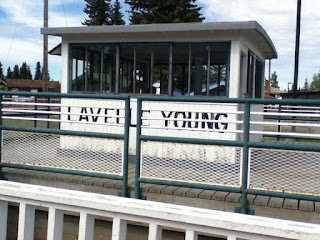 The Lavelle Young was the first commercial steam boat traveling the waters back in 1901 when people wanted to come up to find gold.  There is only the wheel house from the boat but people can go in, pretend to steer the boat and take pictures of themselves.

It lies in the open area between the original village and the additions including the merry-go-round. 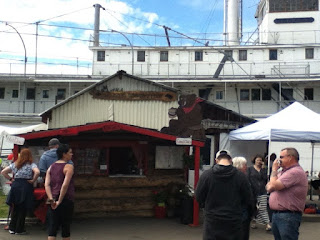 This eating place is at the end of the row of cabins.  They sell a lot of hamburgers and is just to the right side of the gangplank leading into the Nenana steam boat.

The white tent is a place for people to sit and enjoy their food. 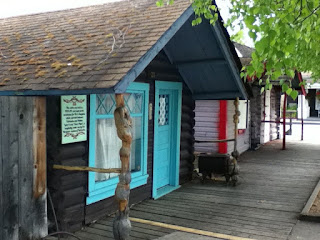 The next three pictures are of cabins in the area behind the food places.  Each and every cabin has a plaque indicating where the building came from and who owned it.

One of the buildings stated the owner had dreamed of owning his own place and at the age of 55, he built his own house and lived it in until he died. 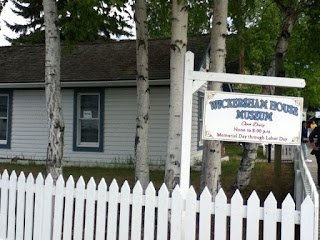 The Wickersham House was the first house built with milled lumber and had a white picket fence.  It was built back in 1904 by Judge Wickersham and was moved here in 1967.

It is now a museum which shows what life was like back in the early days of the town.  The interesting thing about the town of Fairbanks is as it began growing, women of the night also came up, living in their own part of town but many married men and became proper ladies. 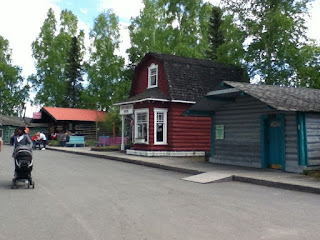 The red building is the Kitty Hensley House which started out as a shack but was rebuilt by a friend who recycled wood from his sternwheeler which had been damaged during spring break up.

I enjoy visiting Pioneer Park.  Last summer, I took my parents over to visit and we went through the aviation museum and had a blast because he knew odd facts about some of the planes from World War II and the Korean War.

The best thing is the whole thing is free in general except for a few things like riding the train, the show at the saloon or the aviation museum. 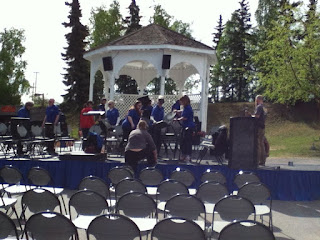 To end today's installment, I've enclosed a picture of the gazebo with extension of where the band played both Saturday and Monday of this past week.

I hope you enjoyed this.  Next week I'll be in Hawaii so I hope to share some pictures with you.  I will be attending an educational technology conference so I'll share some pictures of parts of Honolulu one does not usually see when visiting Hawaii.

Have a nice time.