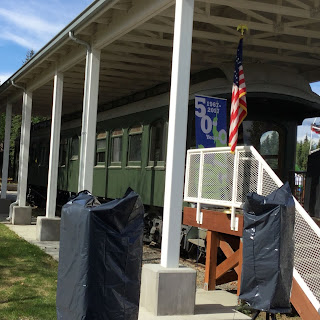 Yesterday you learned about the 50th anniversary celebration but today, you'll see some of neat things found at Alaska Land or Pioneer Park which make up the place.  It caters to both tourists and locals due to all the neat buildings they have.

One of the biggest attractions is the personal train car for President Harding.  People can wander through it and check out all the amenities of the car.   Yes it shows its age and I'm not sure when it came up to Alaska but its something most people check it out.

Yes I've been through it.  I didn't go through it Saturday because the Mayor set up there to give his speech. 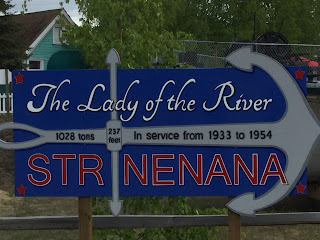 Across the way is the River boat Nenana,  one of the paddle wheelers servicing villages along the rivers.  Paddle wheelers traveled the rivers bringing people, mail, and supplies to Fairbanks in the early days.  This particular vessel serviced the villages between 1933 and 1954.

Admission is free and they've worked on building dioramas so people can see what the places looked like back when the paddle wheelers went up and down the river. 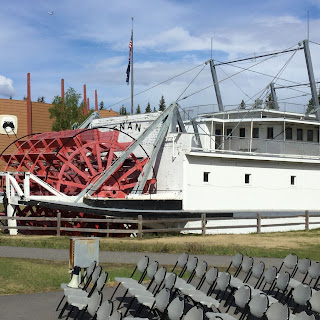 This picture was taken from the gazebo.  I'd helped set up the music stands for the band concert and when ready, I took time to take a couple of pictures of the Nenana.

The boat is not in water.  Its sitting on the ground in a hole so you have to cross over walk ways to enter and leave the boat.  Its actually in decent shape.

The chairs you see are there and are in front of the rail car.  This is seating for those who want to be in direct line of the mayor and other dignitaries who are celebrating the 50th anniversary. 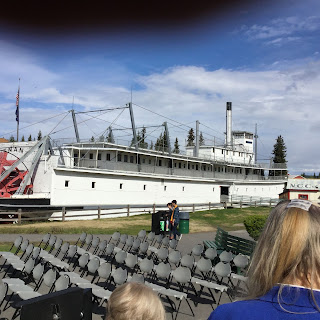 This shot shows the whole Nenana boat.  You can see the walkway into the boat.  There is another walkway on the opposite side directly across from this one.

No one is allowed in the upper layers but you can see the boat house at the very top.  When you go into the boat, you hit the information area which has a nice map and other things.  You can peel off to the right or to the left.

Either way, you pass through the diorama which shows villages the boat stopped through as you head to the mechanical parts which run the boat.  Fortunately for those who know nothing about how a paddle wheeler works, there are signs all over the place identifying each section along with information on the job of each part. 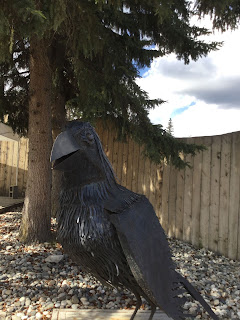 I snapped this picture as I came back from the bathroom.  Its a huge metal bird, perhaps a raven but absolutely wonderful  and so real.

If you look carefully, you can see the beak, eyes, wings, and even the roughness of the feathers.  It is awesome and so beautiful.  To the left out of sight is a set of picnic tables.  A family was enjoying time at the tables while I photographed this piece of art.

Most of what you see scattered around the place are pieces from the early days of mining and farming.  Yes I grabbed a few pictures of those but I didn't think they'd be as interesting as this sculpture. 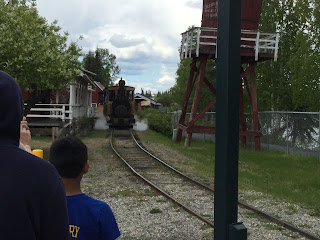 Since this was a special day, two different rail companies operated runs.  The first is the once which runs most days around the park.  Its run by a gas engine and is owned by Alaska Land but the other is a renovated steam engine operated by the local railroad club.

These railway enthusiasts bring it out on special occasions complete with the coal fired steam engine.  This engine actually ran in this area back at the turn of the 1900's when Fairbanks and other towns in the area found gold.  The train ran from Fairbanks out to other gold mines and brought supplies and people out to the sites.

The railway club found this engine down in Wisconsin or Michigan, bought it, brought it up and worked on it until it ran.  They charge a small fee for a ride on it and use the funds to purchase coal and keep it up and running.  It is a piece of history, they brought to life again.

One year, Fairbanks had had so little rain, the whole area was under a burn prohibition.  They still ran the train but they posted members around the park with water so they could snuff out any fires started from the stray sparks coming from the steam engine.
Posted by Lee MacArthur at 4:00 AM