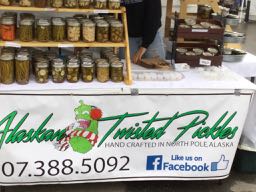 The local Farmers Market is open three days a week, Saturday, Sunday, and Wednesday.  I do not go on Sundays, only Saturdays and Sundays.

So I found a few more places to share with you from my latest trip through. There are more than one of each type of product.

I highlighted a pickle place earlier but this one has a fun title.  Alaskan Twisted Pickles.  No, I haven't tried it yet but I grin every time I walk by.  If you read the picture carefully, you'll see the folks who own this business are from North Pole,   Its a town about 15 miles south of Fairbanks on the road to Tok. 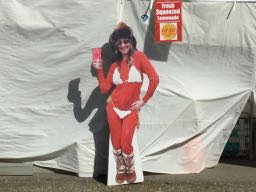 I had to take a photo of this stand.  This is the Fresh Alaskan Lemonade.  This woman operates the stand but not in her bikini over red long johns. This picture was taken from the parking lot, just in front of my truck.

Her son and daughter were working in the stand when I stopped by to get a picture inside of her husband.  The son covered his eyes during the whole conversation.  It seems he was embarrassed his parent made stand ups of themselves in their crazy outfits. 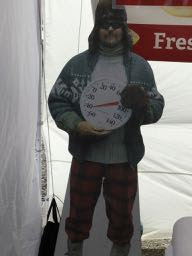 Here is a cutout of dad in his Alaskan gear with the thermometer showing a wonderful chilly temperature of -40.  It actually does get that cold in Fairbanks in the middle winter when the lemonade would freeze solid.

I'm told their coconut lemonade is quite good.  It has a base of coconut milk with lemonade added to it.j  I haven't tried it because I don't like most lemonades as they are too strong. I much prefer a light lemon flavored water.

The good news is that tomatoes are starting to make their appearance.  These are grown in green houses.  Its only been in the past few weeks we could plant outdoors.

Unfortunately, we've had a couple cold snaps and snow or hail depending on where you lived so outdoor tomatoes are a bit behind.  Mine haven't grown that much since I planted them. It also has been rather cool so they've not gotten a lot of warmth.

Side Note:  Every year a bike race is held from Haines Junction in Canada to Haines Alaska.  As a bit of background, you can take a ferry to Haines, Alaska, get off, drive up the road to Haines Junction, turn left and drive to Alaska in a day.  You do have to go through customs twice but its really a beautiful drive.

Back to the race, its a relay race between the two cities 148 miles apart.  Winners take 7 hours or so, just to win the race and it can be done by teams or by individuals.  What makes this a rather unique race is they allow unicycles but this year, it had to be cancelled due to snow.  We do get snow into June but its the first time it happened.

Have a great day.  Enjoy your up coming weekend.
Posted by Lee MacArthur at 4:00 AM