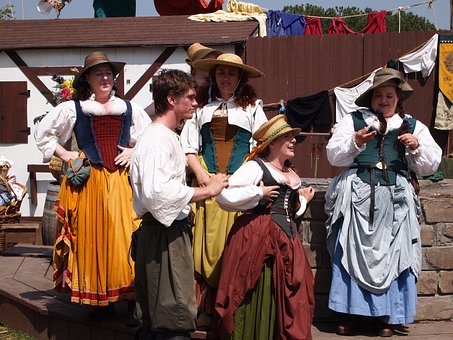 Its summer when all the new movies come out.  Some are futuristic.  Some are action, and some are historical.

The thing about period pieces, is that sometimes the costuming is correct and sometimes it is not.  Either way, if you don't care about the costuming, never go to one of these movies with a person who has knowledge of historical costuming.

Many years ago, I went to see The Mask Of Zorro with Antonio Bandaras.  I sat next to a young lady who had some definite comments on certain scenes.  If you've seen the movie, you know the scene where Zorro places a few cuts on the lead female's corset and it sprang apart, leaving her in her underthings.

Talk about nasty comments.  Basically it boiled down to "A corset is reinforced so it won't come apart without a lot of work and a few flicks of his weapon won't do it.  I heard via friends there was a ton of debate over those little shoulder things in First Knight with Sean Connery and Richard Gere.  People researched it to see if those things actually existed.

On the other hand, the Pride and Prejudice movies of about the same time period are noted for being beautiful representations of period costuming.  Yes, I've watched them with friends during marathon sewing sessions and they pointed out all the details, down to the trim and everything else.  Serious costumers are fun to sit with during films.

What many people forget about costume designers in films is they are trying to create an image.  It is a vision being brought to life.  We know that in the real world Xena and her companion would never have run around in those leather outfits.  They were not appropriate for the time but it made the male population happy.

Films are a visualization of written words on a page, designed to entertain enough people to make a profit.  Sometimes the costuming is perfect but other times the designer has taken a certain amount of license to get the feel without being historically perfect.

If you think females are bad, try sitting through a historical war movie or one that takes place in say India with a guy who knows his army costuming.  He'll let you know if a button is out of place or if something is not correct for the unit.  Some of these guys are walking encyclopedias of uniform knowledge.

I know a fair bit about historical costuming but I try to dismiss my knowledge so I can enjoy the movie but where I get picky is anytime I see a mathematical equation in the story line and its not right.  One example had to do with The Saint movie.  The writers threw in some triple integrals and I muttered to friends through the whole movie about the lousy math.

Yes, movies are designed to entertain us but occasionally there are little things that trigger our passions.  Let me know what you think.
Posted by Lee MacArthur at 4:00 AM

Email ThisBlogThis!Share to TwitterShare to FacebookShare to Pinterest
Labels: Movies