The History of Lipstick plus 17 interesting facts about it. 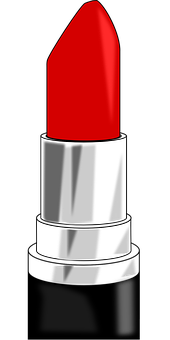 I grew up watching my grandmother and mother apply their red lipstick every day.  It didn't matter if they were going out or staying in but the properly dressed woman and to have that finishing touch. It was always a red, like a cherry red, never a pink.

So where did lipstick come from and when did it become acceptable to wear it? Originally, lipstick was more of a stain than anything else because fruit and plant juices provided the coloring but it appears the Mesopotamian s were the first ones to create something more.  They ground up precious gems and dusted their lips with the sparkly material.

Next came Egypt where people belonging to the royal class, priests, and the high class regularly wore lipsticks.  Although there were several recipes used to produce lipstick, some required extremely poisonous ingredients.  However, this is the place where the carmine color became popular and it was gotten from a specific insect.

The use of lipstick spread to the Romans and Greek where it was primarily used by actors but its use faded when Christianity spread because the catholic church outlawed its use because red was the color of Satan. However, it came back into fashion with Queen Elizabeth the First due to the pale skin and bright red lips she promoted.

After she died, its use fell into disuse except for certain types of women.  No self respecting woman used lipstick at this point in time.  Wearing lipstick came back into fashion in the late 19th century when photography and movies came into fashion.  At the same time, improvements were made until it became part of being the well dressed woman. Apparently lipstick flourished in the Middle East and Asia when it fell out of use in Europe.

So now for some interesting facts about lipstick.

4.  The most expensive lipstick is Guerlain's KissKiss Gold and Diamonds Lipstick available for a paltry $62,000 because the tube is made up of 110 grams of 18K gold and covered with 199 diamonds.

5. Supposedly, only Elizabeth Taylor was allowed to wear red lipstick on her movie sets.

6.  Lipstick was the only cosmetic not rationed during World War II because it was classified as a moral booster.

7. Apparently, men stare at women longer who wear lipstick than those without it.

8. In the 1500's people believed lipstick had magic healing properties.

9.  The term "Kiss of Death" came about because some of the early lipsticks contained poisonous ingredients..

10.  Lipsticks do have a use by date.  They can become rancid.  If you want them to last longer, store them in a fridge.

13. Lipstick sales go up on gloomy or rainy days.

14.  In the early 1900's several suffragettes wore bright red lipstick as a way of protesting for the right to vote.

16. In 1915, the state legislature of Kansas introduced a law prohibiting women under the age of 44 from wearing lipstick. Fortunately, it did not pass.

17.  The state of Pennsylvania allowed men to annul their marriage is on the grounds their wife wore lipstick or other makeup during their courtship.

Let me know what you think!  I found it fascinating.

Email ThisBlogThis!Share to TwitterShare to FacebookShare to Pinterest
Labels: lipstick