I grew up moving around and living in various places.  When it came time for me to learn to drive, I lived in Australia.

If you are an American, you think Australians drive on the "wrong" side but the Australians think the same of Americans.
When I was younger I was lived in a small town, about 100 miles north of Brisbane, Queensland.  At the time, you had to be 17 to even consider getting your learners permit.  So when I turned 17, my father took me in and I got my learners permit.  My father took on the job of teaching me to drive.  Drivers education was not something schools offered  and insurance companies did not give discounts for students taking drivers ed classes.

It was ok driving in town where there were lots of cars and center lines to help me stay on the correct side of the road but once we were out of town traveling down some of those back roads, I lost my visual clues.  One day when I was at an intersection.  I looked left! I looked right!  There were absolutely no cars in sight!  Not even one measly center line!  Center lines are important visual clues 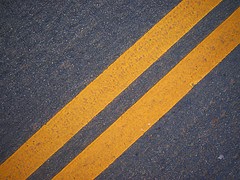 None!  Geez.  Having grown up in the states, I couldn't just trust my instinct when I turned.  I think I must have sat there two or three minutes while I worked out in my head, which way I needed to turn.

Then the most brilliant idea popped into my head!

"The driver is always next to the center of the road."

Yeahhhhhhhh!  Now I had a rule that would keep me safe!   Well,  safe enough in most places.

Out here, people use the rules of the road as suggestions.   Most drivers whiz around people, other machines, etc and it is sometimes a challenge to navigate through the parking mess aka parking lot at the store. Machines are parked any old way.  No lines, no asphalt.

Australia was also the first time I encountered a roundabout.  There were rules for going around one but they made no sense for me as you approached from the side that seemed wrong to my sensibilities. I am glad to say, that I survived with no scratches and Fairbanks, Alaska has put in a bunch of roundabout and I can navigate around them with no trouble.

One thing I saved for last was a ritual my father performed during the lesson.  About halfway through the lesson, my father had me park outside a put so he could pop in and fortify himself.  Of course, this gave me practice parking on a hill.

The only other issue with learning to drive is that my parents owned an old Ford station wagon with a manual shift instead of an automatic.  What made it more challenging was the shift was on the column so I spent a lot of time, trying to signal with the shift and shift with the signal. This is not something you want happening in the middle of passing another car.

By the way, he did survive the experience and went on to teach 3 more siblings and he did it without loosing any more hair than he already had.
Posted by Lee MacArthur at 10:59 AM

Email ThisBlogThis!Share to TwitterShare to FacebookShare to Pinterest
Labels: Driving