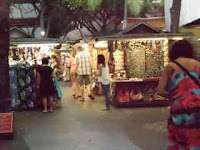 Since I am only on the island of Oahu and I wanted to go to a place that made me feel as if I were going farther west to Asia, I headed over to Duke's alley.   Duke's alley was  named after Duke Kahanamoku who is famous for his athletic ability as a surfer and swimmer. 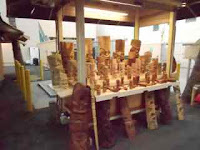 When they closed down the International Market place, many of the venders moved to the alley.  It is so filled with merchants that it has   very narrow pathways between all the stalls, it always feels quite bustling and exotic.  I love going because it makes me feel as if I've been transported to a small marketplace in the south pacific or perhaps in China or Vietnam. 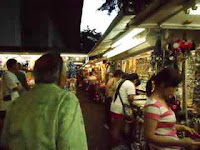 Occasionally, you run across someone who offers something different such as the man who makes tiki's but most sell either clothing or jewelry or little surfboards or other trinkets.  The nice thing is that pricing is rather standardized among all the merchants. It reminds me of a farmer's market where the prices are pretty consistent. 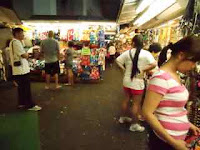 It is always filled with people wandering through, pricing the items that catch their eyes and sometimes they buy, sometimes they don't, it all depends on what they desire.  I've been there at 9 AM or 9 PM and its always busy.

Me?  I know what I'm going to get before I go.  Tonight, I went over to buy some sarongs but I might go back in a day or two to get some of those huge beach towels to take home with me.  They are so big, I can snuggle up in them and just enjoy them.....LOL

Thank you for joining me in my little trip down Duke's Alleyway.