I am visiting my parents in a lovely seaside town near the Canadian Border.  The other day, the library arranged for a helicopter from the Border Patrol to visit so kids could sit in the helicopter and learn more about them.  My youngest went with me and had a blast learning more about them. 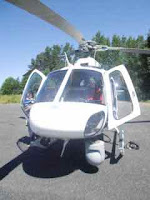 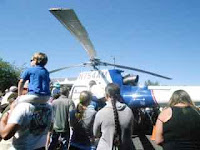 The helicopter arrived around 10:30 am to a huge crowd.  The library had roped off the overflow parking lot for its landing after it circled above the town a couple of times.

Once it landed, the pilots took time to explain how the helicopter worked.  They explained about the camera mounted on the helicopter.  The camera can take both regular pictures and perform heat sensing. 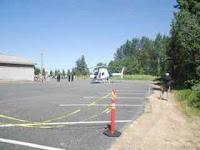 At the end of the hour, everyone was moved away from the helicopter and placed safely behind a yellow police tape and the helicopter took off and flew away.

She wanted to see it because she has never been in a helicopter.  While she had fun at the helicopter, I was in the library working because I had a job once that I could only get to by helicopter.  So I would fly out, stay several months and then fly back.    To her, she was visiting paradise when they let her sit in the helicopter and if she ever gets a chance to see one again, she'll take advantage of it.
Posted by Lee MacArthur at 2:29 PM

Email ThisBlogThis!Share to TwitterShare to FacebookShare to Pinterest
Labels: Helicopters