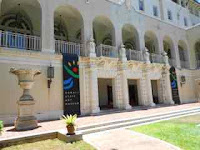 Imagine living in a world ruled by Kings or Queens. You've extended a welcome to people who come to your land,  let them set up businesses, own land, and even become part of the local in crowd.  And how do they repay you?  They arrange for you to be overthrown and your country is taken over and ruled by another country. 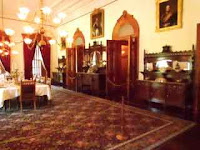 Your family united the country and has run it for multiple generations and you are given no choice but to abdicate.  None! 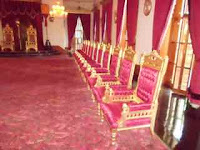 This is what happened in Hawaii way back in the 1890's.  What you see is Iolani Palace built back around 1880 and owned by the Royal Family.  It was their residence and it was built to have the most modern amenities of the time.

There are regularly scheduled tours with tour guides or a self-tour you can take.  All visitors are required to cover their shoes so as to protect the flooring and keep it in as good shape as they can. 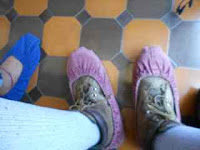 What is sad is that a few years after Queen Liliuokalani  was forced to yield her authority, she was convicted of leading a plot to overthrow the new government so she would rule again.

After a nasty trial in front of a military tribune, she was convicted of the crime and sentenced to 5 years of hard labor but that sentence was commuted so she ended up under house arrest in the palace.   Was she involved in the plot?   I don't know.

There is a group that keeps the palace in its beautiful glory so all can see it and learn more about its history and its importance to the Hawaiian Peoples.  I have more pictures to share and more information on the family who built it.

Ohhh one more thing. If you ever have watched Hawaii 5-0 either version, you will have seen the outside of this building.....LOL