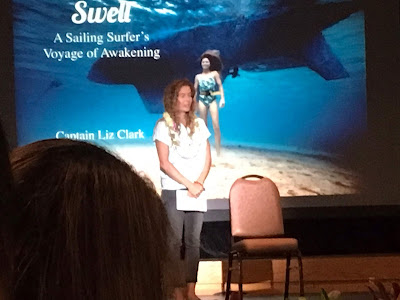 Captain Liz Clark opened the second day of the conference with her keynote speech sharing with us her adventures as she spent 12 years sailing around the Pacific solo.

It was interesting hearing how she grew up in San Diego with a father who loved sailing and would take her out.  At 9 years old, she formed the dream of sailing around on her own.

A couple years later, her family ended up spending 6 months sailing along the western coast of Mexico.  Along the way, she learned to surf.

The time came when her family returned to land so she and her siblings could resume schooling.  Eventually she completed a degree in Environmental Studies but she had trouble finding the right job.  Not long after, she ran into one of her professors who offered her the chance to take his boat out and sail it for him.

He'd always had the dream to sail free but his wife was more into horses and it was never going to happen so he offered Liz the boat, spent three years getting it fixed up before she took it out.  In the meantime, she needed to learn to fix engines, maintain a sail and other skills she'd need by herself.  Eventually, it was time to shove off.

The first leg of the trip took her down to Mexico and she had friends with her as she learned the ins and outs of the boat.  She found some remote spots to surf and enjoy life.  She told the story of seeing this great place to surf, catching a ride in a local truck to the spot and then getting a ride back with the police at the end of the day.

When she was confident, she called her parents to let them know she was heading off to the South Pacific.  Her mother immediately hopped a plane to be her crew for the trip.  Her mother had no interest in sailing but she wasn't about to let her daughter travel 22 days on her own.  At one point they hit a nasty storm but made it safely to the destination.  After her mother left, she began traveling from one island to another on her own time table.

Eventually, she began putting her adventures on paper and recently published a book called "Swell: Sailing the Pacific in Search of Surf and Self"  She read passages from it to us, sharing parts of her trip in pictures and words.  Along the way, she even acquired a pet cat who loved to be on the boat.  She shared the time she landed on a small island and was met by a woman on a bicycle who took her on a tour around the small island.

She told us again and again that we must follow our own paths and not the paths everyone else wants us to take.  I came away with the feeling that failure is not the end but the beginning.  She was funny and honest. She included the information that once she ran out of funding, she slowed down and took time to enjoy her life.  She earned money through publishing articles and any other way she could.

Based on the passages she read to us, her adventure gave her time to really reflect and find herself in a way she would never have if she stayed in the states.  Have a great day and let me know what you think.

Tomorrow, I'll be sharing photos of a wonderful place in Manoa designed to keep information on Hawaiian plants alive.  Stay tuned for that.
Posted by Lee MacArthur at 4:00 AM

Email ThisBlogThis!Share to TwitterShare to FacebookShare to Pinterest
Labels: Travel