As promised, I am sharing pictures from the two places involved in my niece’s wedding.  They started at a place called the Ermatage. It is a set of historical buildings owned by the city of Waghausel Germany. The brief history I received via the translator from the official is vague but here goes.

Sometime in the past, a bishop lived in the place but it was haunted. Later on in the last century or so, a company came in and built two extremely tall silo’s for molasses.  The company took over the building for its offices.  When the company went out of business, the city took it over and is currently renovating it. 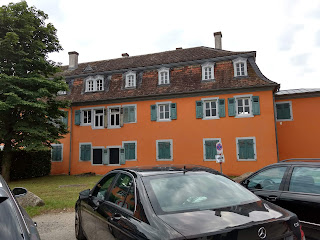 View of the building from the parking lot. The entrance is directly on the other side. 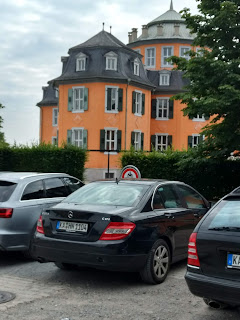 This is another shot of the building. 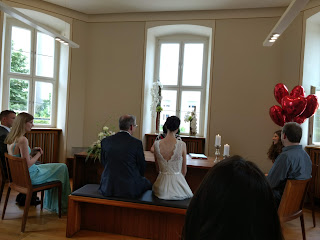 This is room where the city performs civil weddings in this building only one month a year.  The bride and groom are in the center with the witnesses to your left and the translator to the right.  The civil servant is hidden by the happy couple.

It is set up so one couple after another is married.  The room is absolutely beautiful and the ceremony has character.

The second or religious ceremony was held at the Catholic Church just a couple of blocks from their house.  The church is so much more ornate than most Catholic Churches in Alaska.

The above is a photo of the church they married in.
The service wa held mostly in German but with some English.  Tomorrow I will have some sightseeing pictures. Let me know what you think, I would live to hear.

Email ThisBlogThis!Share to TwitterShare to FacebookShare to Pinterest
Labels: Photos