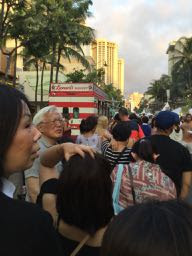 The first night of the Pan Pacific, they always hold a street fare combined with a block party. There are multiple stages arranged down the road, each hosting a different act and named after the hotel it's in front of.

In addition, there is always something going on on the Waikiki Beach Walk down by Trump Towers.  I don't usually get that far down as I prefer staying on the main road.

Leonard's bakery truck is usually located at the farthest end from me.  I spent about 20 minutes in line waiting for my half dozen creme filled Malasadas.  The choices are more limited than going to the store and the product a bit more yeasty but they are still good.

I took my first photo looking down the street while I stood in line, waiting to order my Malasadas.  They are best when still nicely warmed and great. 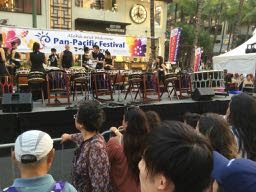 The first stage had some Japanese drummers performing for the audience.  Tomorrow I'll have a short clip available for you to watch.  Japanese drumming is wonderfully energetic and syncopated.

The next stage had Japanese drummers playing Caribbean style music with the steel drums and traditional instruments found with that type of music. 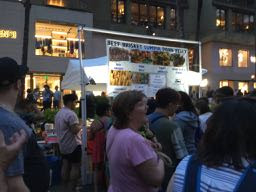 In between the stages you could find a great choice of meals from Thai, to local, to BBQ but each with nice long lines of people waiting to enjoy the food.

I stood in line at a Thai place because they had Mango Sticky Rice which is rice cooked with coconut milk.  When its finished, its like a thick rice pudding with more rice than pudding.  Its covered with a sweetened coconut milk and topped with sliced mango.  It is a very traditional desert. 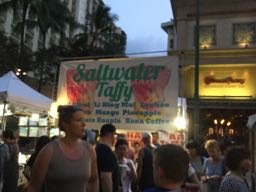 Of course, the Saltwater Taffy folks are there with their uniquely Hawaiian flavors such as Mango, Pineapple, Guava, etc.   I didn't stop but that place has a long line of people, always.

A couple tables down is the local lemonade place with locally flavored ice teas.  I prefer my teas, even ice teas, to be plain with no added flavors. 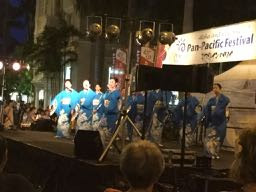 As I said earlier, every stage has a different act going.  this stage has traditional Japanese dancers who share their type of dancing with everyone.

The music is traditional and quite lovely.  Another stage I passed had a very modern show with hip hop or rap.  I'm not sure which but I know the singer bounced a lot.

I hurried on because it was starting to get a bit thick with people. 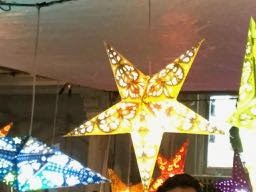 This artist created beautiful shining stars. The pictures do not do justice to the stars.  They are three dimensional, carved with lights inside.  Absolutely beautiful.

There were all sorts of crafts scattered throughout the area.  The street fair covers 4 maybe 5 blocks.

I saw someone offering golf stuff, others offering wooden pens, honey, jams, clothing, just about everything you'd find at a farmer's market except the fruits and veggies. 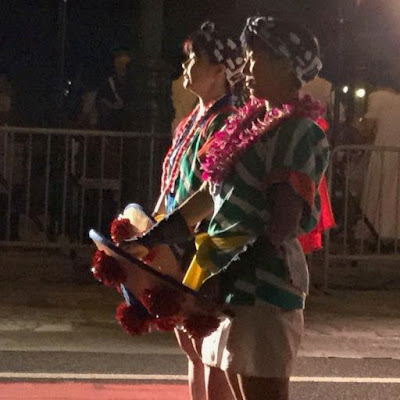 The last stage parked itself in the middle of the street and hosted some sort of traditional Japanese street dancing.  It was fun watching.

This stage began the Japanese tables where they advertised local shows or cities. Sort of local visitor bureaus for several places in Japan.

One had cotton banners of Kabuki characters.  They even had a couple of hats so you could become one of the characters.  This booth also allowed women to try out Japanese Kimonos.

A huge gust of wind hit and started to tear some of the materials off the tables. 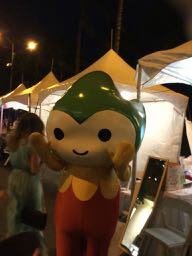 This is one of the characters from Japan but I don't know who. I took the picture because the character is cute and lots of people were taking photos with it.

I enjoyed my time at the fair but by the time I left at 8 PM, it was getting so filled with people I almost couldn't walk easily.

There was a police presence throughout the whole area.  Some on bikes, some on foot but they were all interacting with the crowd to build good relationships.  I even caught a few enjoying some of the tasty treats from various vendors.

This always happens the first night of Pan Pacific. The Pan-Pacific celebration has been around for the last 39 years.  It's mission is to promote understanding and friendship through an exchange of culture.

I've been coming for several years and enjoy it each year.  Tomorrow, I'll have a couple video clips showing some of what was presented at one stage.

Let me know what you think.
Posted by Lee MacArthur at 4:00 AM