I'm actually home but finishing up sharing the last few pictures of Germany with you.   Germany is 10 hours ahead of Alaska, my body finally adjusted to being over there but since I came back, my body has not gotten back to Alaskan Time.  I think it's because it does not get dark at all right now.  The darkest it gets is a twilight dusky where you can still see everything clearly 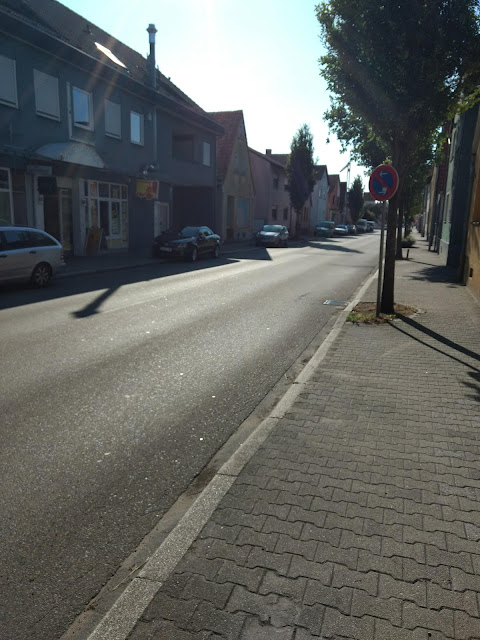 Compared to the United States, many German towns have a unique way of handling parking.  The "sidewalks" are much wider than normal because cars pull up and park there.

Sometimes there was enough space to walk other times, you ended up moving around the cars.

Another thing, was mail delivery in the town I visited.  The postmen rode bikes piled up with packages and mail.  They rode bikes with bright yellow baskets labeled "Deutch Post".

My niece said the job of postman doesn't pay very much so they have trouble finding people to fill the positions.

Most of the houses built in the town I visited were made of concrete. I'm told that is because houses are so close to each other, it prevents the spread of fire. 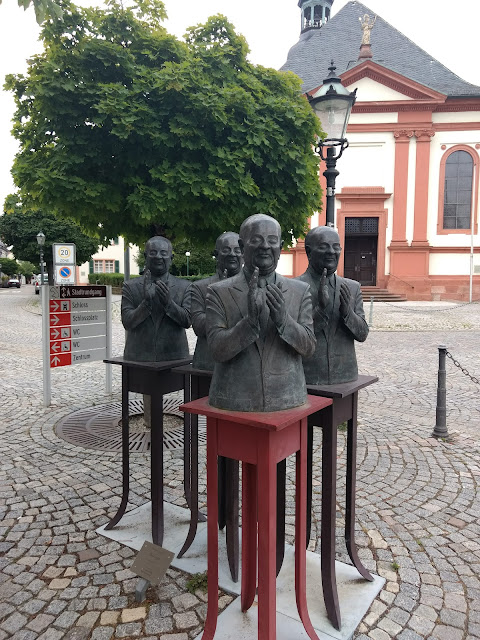 After we finished checking out the palace,  we headed over to where the car was parked.  On the way, we passed this park full of sculptures.

It wasn't a large park, just a small piece of paradise in the middle of the place but the sculptures were fun.

It seems most of the roads and sidewalks were made of bricks or something similar.

I took pictures of the art because it was interesting and livened up the area.

No, I didn't get the name of this piece.  My ride needed to get us back to the house before returning to grab a second group.

It was decided running two loads of people was faster than hustling everyone home via train. 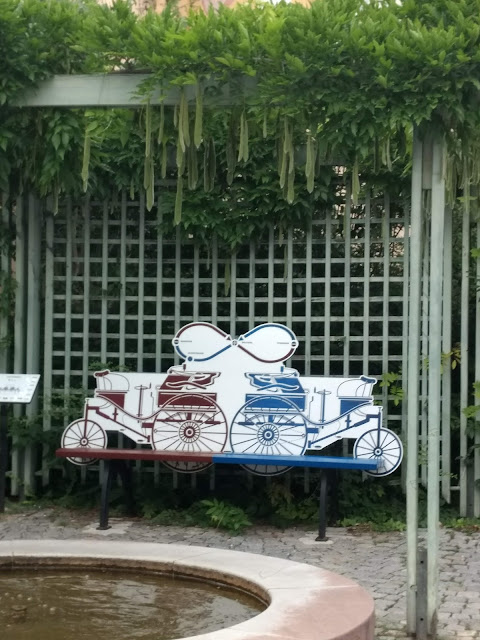 The painting adds quite a bit to the bench in the park.  I think the seat back is based on one of the early bicycle models.

The set is painted half red, half blue to coordinate with the color pattern of the back.

There is a lot of art in Germany, statues, these, and lots of great artistic tagging also known as graffiti.

Yeah, they aren't supposed to tag but they do it anyway.  If they are caught, they have to clean stuff up and pay a fine. 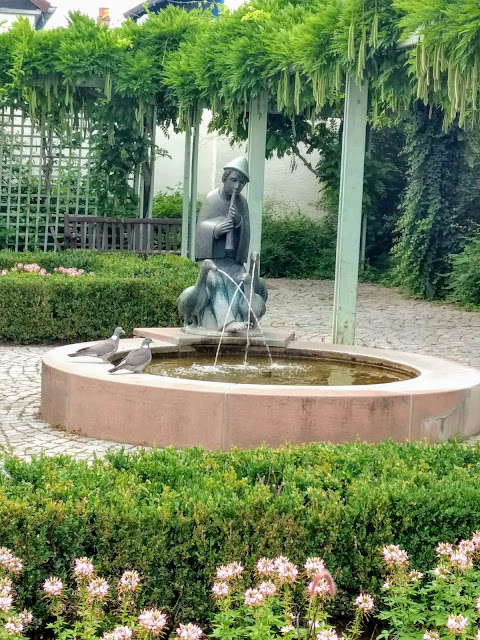 At first glance, I thought this might be a statue of The Pied Piper of Hamlin but there are ducks instead of rats. 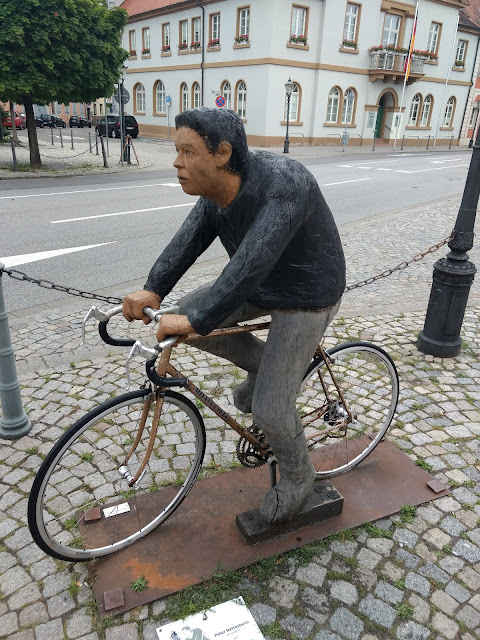 When I first thought I saw this another bicyclist, just like the others speeding through town.

I love the detail of the sculpture added to the bike.

One of the folks with me that night thought it was a really strange bicyclist until he realized it was a sculpture.

I took these photos after eating a German interpretation of Mexican which is nothing like I'm used to either in the states or in Mexico.

It was also the first game between Germany and Mexico for the World Soccer Cup.


I'll be heading off to Bellingham and Denver for the weekend and July 4th celebration.  I'll share photos of my travel with you.  Share some of my fun.  Next summer, I'm hoping to head off to Ireland, back to Germany and maybe throw in Paris along the way.

I hope you enjoyed the bits I shared from my trip.  I enjoyed it, especially when my niece told me that most apartments do not come with kitchens already done.  The renter brings in the cabinets, refrigerator, stove, etc. and when they are move, it all goes with them.  We take our furniture, they move their kitchens.

Have a great day.  Let me know what you think, I'd love to hear.
Posted by Lee MacArthur at 4:00 AM

Email ThisBlogThis!Share to TwitterShare to FacebookShare to Pinterest
Labels: Germany