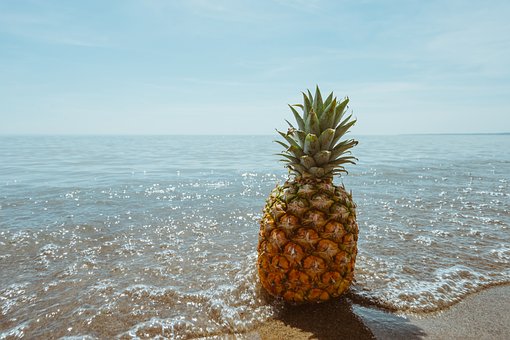 The other day, as I wondered through a new grocery store , I came across a couple new varieties of fruits I've never seen before.  When most of us find pineapple at the store, its fairly large with a tangy sweet flavor.

The inside is usually a bright yellow and the taste is still a bit acidic.  Its often found on top of a Hawaiian pizza with ham or on the ham you bake for Sunday dinner.  Personally, I prefer the pineapple without the ham but that's me. 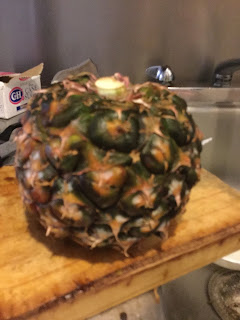 Well I came across a much smaller, rounder pineapple at the store.  It's much smaller with a teasing name of Honey cream.  Its actually the perfect size for one or two people.

As soon as I got back to the room, I tried a piece.  The sweetness burst in my mouth, like an explosion of mmmmmm goodness.  I had to have another piece.

The picture below shows the interior is a light yellow, almost a cream color.  Its also a bit smaller and rounder than the normal pineapples but its sweetness is addictive.

I wanted to eat the whole thing at one sitting because of its sweetness.  This is not a variety you find at most supermarkets. 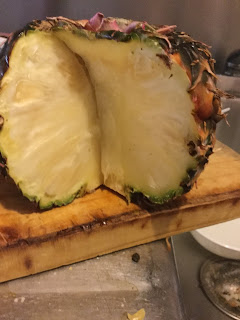 I suspect this type is grown to fill a niche within the pineapple growing section.  If I could take a couple home I would but if you've ever been to Hawaii, they have strict rules on what you can take from the state and what can be brought in.

Yes, the cut was a bit wonky but that was me.  I am not good at cutting pineapples. Just to let you know, I didn't even cut the skin off.  I just cut the pineapple in slices and ate the inside as if it were a lice of watermelon.

I want to get every bit of goodness out of it. 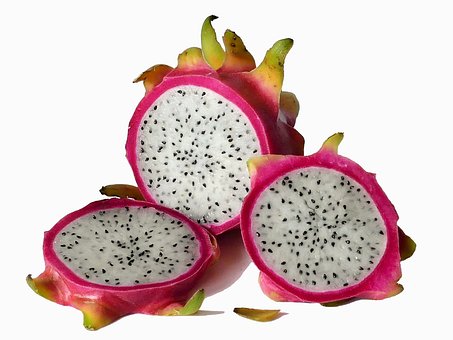 The above photo shows the type of dragon fruit I'm used to finding at the grocery store.  Its got a pink outer skin with a pristine white interior.  The ones I've tasted are never that sweet but the ones I found at the same grocery store.  I seems to be a different variety and soooooo sweet. 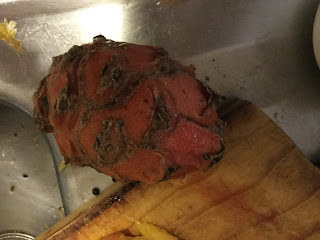 The outside is more orange than the other type, smaller and I suspect ripened on the vine rather than picked slightly green.

I admit, I almost didn't buy the fruit because it was so much smaller and more wrinkled than what I was used to but I decided to try it.

When I cut it open, the juice oozed out of a deep red pulp with black seeds sprinkled throughout the fruit. 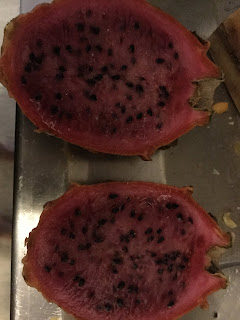 This variety of Dragon fruit was so much sweeter and juicier than the other.  I hope to find another one or two like this so I can really enjoy them.

If you saw the picture of the dragon yesterday, the  caption came from a book I just finished reading in which a magical dragon was birthed from the dragon fruit.  In the story, magic abounded but the dragons died a long time ago or so the legend stated.  The heroine had to find them and in the process had a small whiskey drinking magical dragon appear from a dragon fruit.

Don't worry, the dragon always paid for any whiskey drunk or bottles taken so it was an honest dragon.

I'm off to enjoy the day.  I hope you enjoyed reading about foods that you might not ordinarily find.  Let me know what you think, I'd love to hear.

Email ThisBlogThis!Share to TwitterShare to FacebookShare to Pinterest
Labels: Pineapples and Dragon Fruit.