King Kamehameha, the ruler who united all the Hawaiian Islands into one.  Prior to this, each island had its own ruler who Kamehameha defeated.  It is said he was born to be great because a comet passed overhead at the moment of his birth.

Today, they celebrate his uniting the islands into one kingdom every June with a day and a parade.  I am usually visiting Hawaii when the parade happens.  The parade is much like most parades with a band, cheerleaders, and floats but they also have several groups of horseback riders representing each island.

In addition, each island is represented by a specific color such as the Big Island is always in red.  The horses are decorated in floral arrangements just as their riders have flowers in the hair or on the hats.

Kamehameha took control in 1810 and his decedents ruled until 1893 when Queen Liliuokalani was forced to abdicate so it became a United States territory.   Now to the parade. 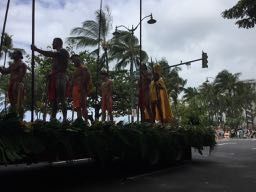 Representative of King Kamehameha - A descendant of the royal line honoring the family and the king.
This parade always starts with the girls carrying a banner announcing the parade, followed by members of the King's Guards and the Royal Hawaiian Band.  Kings Guards is more for show in the time but years ago, before the monarchy was overthrown, they guarded the king.
No parade is complete without the Royal Hawaiian Band which has been around for over 100 years.  It was started by one of the kings and is well known all over the islands.
Right behind the band, is the queen of the parade with her court.  The other groups have a princess with her court of males and females.  The women wear long dresses which drape gracefully over the horses while the men are in jeans, shirts and hats.  The hats have a band of flowers.  The MC said you can always tell a Hawaiian Cowboy by the flowers around the hat.
Since the parade has live animals walking down city streets, every group had its own clean up detail.  Just about every clean-up detail decorated the wagon and container to make it pretty.
As you can see, the horses are decked in flowers, the women have flowers because this is a floral parade.
The princess rides in front while her court is behind her in a group.  first the three women, followed by the three men.
Another beautifully decorated clean up wagon.  This year they went all out.
The above is the princess of Maui.  The princess is in distinctive out fit with the court wearing colors that are slightly different yet complementary to the princess.
This is the clean-up group for Maui.  According to the MC, many of these folks flew over for the parade because its such an important thing.
The princess is always gracious as she rides back and forth greeting people.  The court waves but they do not ride back and forth.
For me, I loved the clean-up groups because they got so creative in decorating their containers.
The Chinese always have a few representatives in this parade and each of the three cars, had a dragon lazing on the back.
I love the way the skirts gently flutter in the wind.


This group, identified theirs as what it really is.

I didn't bother putting up pictures of the various winners of beauty pageants because there were like 12 of them ranging from Miss Preteen Hawaii to Miss Bikini, to Miss Asian something.  I don't think I've ever seen a parade with as many beauty pageant winners as I have here.

Tomorrow I'll have  pictures of the Pan Pacific Parade.