When they tore down the original International Market Place, many merchants fled to the small alleyway next to the market place.  It is not easy to spot from either the beach side or Kuhio unless you know its there.

You can see the edge of it as you look up the alley.  Duke refers to Duke Kahanamoku, the father of modern surfing, world class Olympian swimmer, and actor.  He's even got his own statue at the beach. 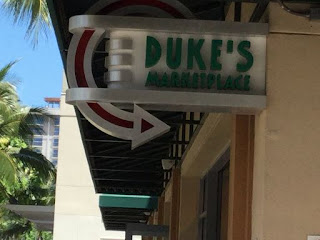 This sign is on the beach side of the alleyway.  Its actually pointing to a new store on the other side of the building.  As you walk down the alleyway towards the marketplace, you pass a series of posters from the past.

These movie posters advertise a variety of beautiful of movies starting with one of the most famous - Blue Hawaii - one of the Elvis films.  Some of these films I have heard of and some I don't know but I am sure my father has. 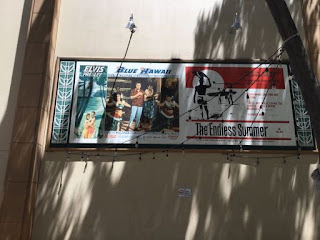 This is the first set of posters of Blue Hawaii and the Endless Summer. Endless summer was released in 1968 and documented the travels of a couple of surfers looking for the perfect wave.  I gather there was a second one.

Of course Blue Hawaii, released in 1961, told of a young man who got out of the service and came home only to defy his family wishes by becoming a tour guide.  This had lots of music and dancing. 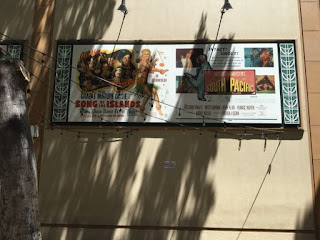 Song of the Islands made in 1942 with Victor Mature, Betty Grable, and Jack Oakie.  The story is that a man with his sidekick sails to an island to negotiate for land with the Irish land baron. He falls in love with the guys daughter and you know the rest.

Most people know the story of the movie, South Pacific, made in 1958 with Rossano Brazzi, Mitzi Gaynor, and John Kerr.  I remember seeing the movie when I was young.  My father really loved it. 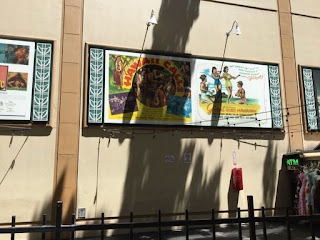 Hawaii Calls dates back to 1938 with the story of a young man who stowed away on a ocean liner.  He is caught and pays for his passage by entertaining everyone with his singing.  At the same time, he and his side kick attempt to recover stolen navel documents.

Gidget Goes Hawaiian dates from 1961.  The basic story line is that Gidget is forced to go to Hawaii with her family.  She is advised by another girl to forget her boyfriend and have fun so Gidget steals her boyfriend and Gidget's orginal boyfriend ends up missing her.

All movies made about or in Hawaii.  Tomorrow, more pictures of my visit to Hawaii.  I hope you have a great day.  let me know what you think.
Posted by Lee MacArthur at 4:00 AM