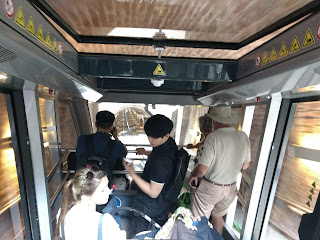 The day after exploring the palace, we headed off to the beautiful city of Heidelberg by train.  The main train station there was filled with people and tons of places to eat.  I discovered cheese covered pretzels in addition to regular pretzels and pretzels with butter.  One could grab a quick sandwich or salad to eat on the train until you got home.

From the train station, we hopped the #33 bus that drove from the more modern part of town to the older part of town with its narrow windy streets, narrower buildings and cobble stone type roads.  The interesting thing about the castle is that you have to take a cable car up the side of the mountain.

The cable car goes up the side of the hill making three stops as it goes to the top.  The first stop is the actually castle level. The second is where people make the change from a modern cable car to a totally wooden old fashioned cable car for the trip up to the top of the hill. 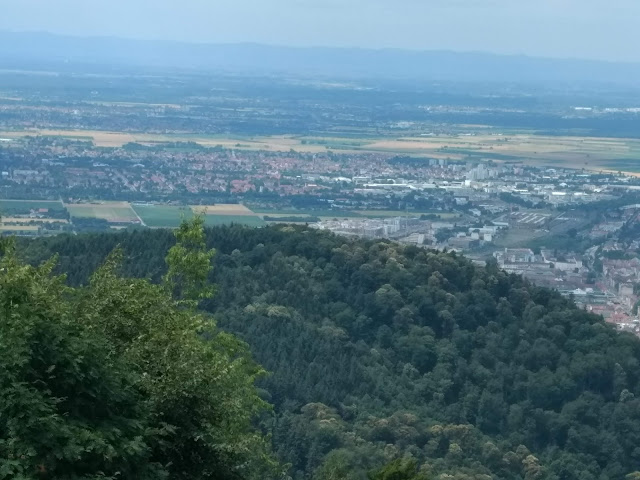 The view from the top is tremendous.  It is possible to see all the way to the mountains/hills off in the distance.  What you see in the above picture is more of Heidelberg.  There is a small place to eat at the top.  Currently, they are building a hotel so much of the area was torn up, making it hard to go the last few yards to the children's area. 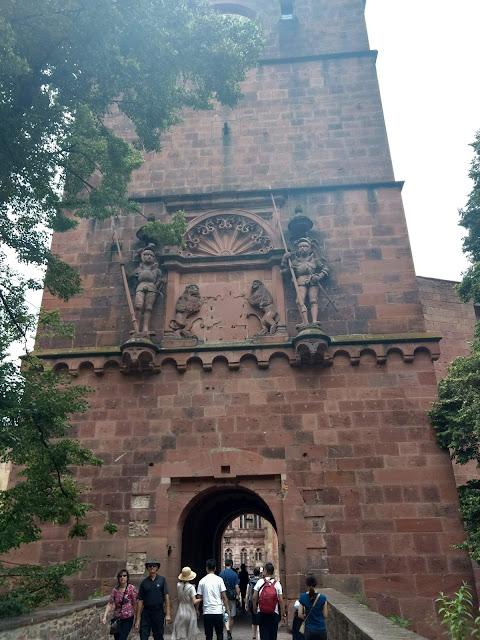 The level where you change cable cars, also has a snack bar, a toilet, and a beautiful view.  There isn't much more on that level.  The castle itself is quite old.  My niece mentioned the castle fell after the 30 years war back in the 1600's.   According to her, people began stealing rocks from the rubble.  Somewhere along the way, someone chose to rebuild parts of the castle to turn it into  a tourist attraction.  Much of the original castle was preserved although at certain points you can see areas where it has fallen down and is not safe.  The day we were there, it looked as if they were taking down a stage from a show the night before.  The picture to the left is the entrance to the castle. What you don't see is the gift shop which is behind you, and more snack shops off to the left behind you. 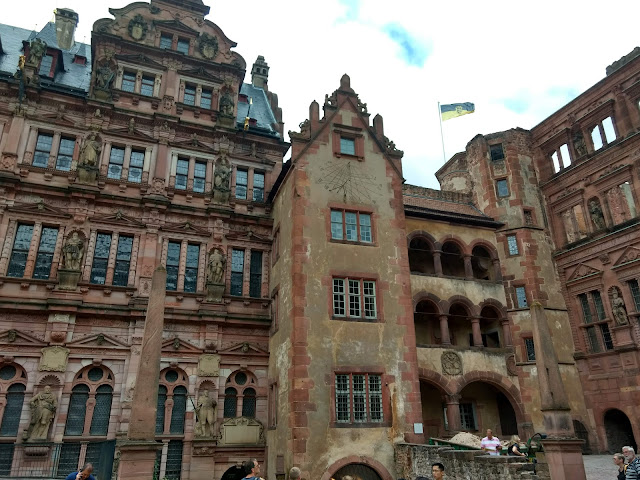 The center part of the castle is still pretty much intact, its the outer parts where you see damage.  The left side has a front but no back to the wing. 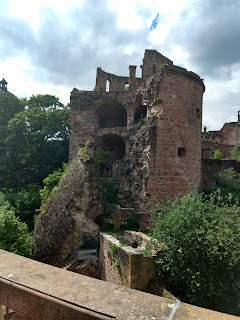 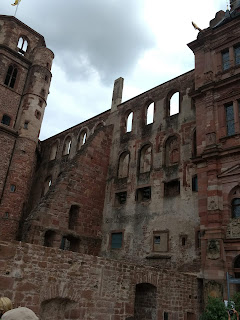 If you look carefully at the two photos placed above you can see the damage to the castle. Inside there are a few restaurants but the most exciting part is the huge wine casket.  When I saw it, I was absolutely amazed. 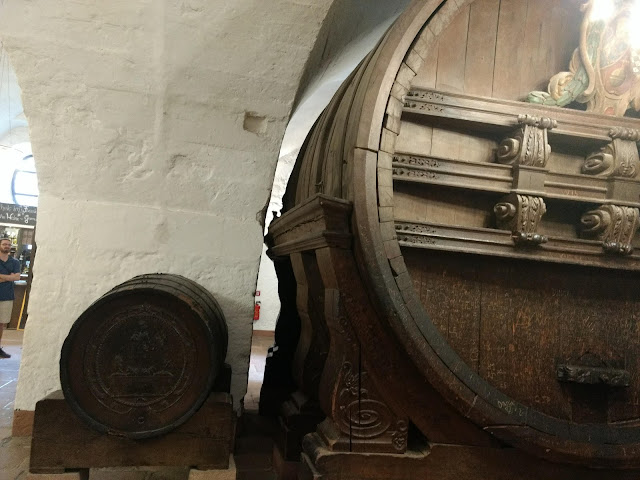 When I first saw the two barrels next to each other, I thought the one on the right was the one my niece spoke of.  She'd said the castle had a wine barrel bigger than any I'd seen before so when I saw these, I agreed but she pointed me to a room behind these two barrels. 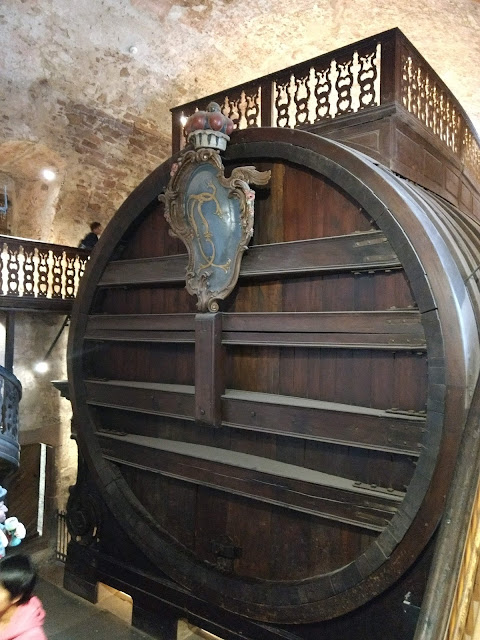 The barrel turned out to take up a whole room. The barrel was about 12 feet across.  The stairs ran along the sides of the room and across the back end so you could stop on the platform on top.  According to my niece, this casket was built to provide wine for one of the folks who inhabited the castle.  The story is he was told he needed to slow down on his drinking so he agreed to cut back to 5 glasses of wine per meal.  That means he cut back to at least 15 glasses per day.  I wonder how much wood it took to build this particular barrel.

Even though the castle is not that high up the hill, the view is still fantastic. The hardest thing about this day, was the number of tour groups moving throughout the place. 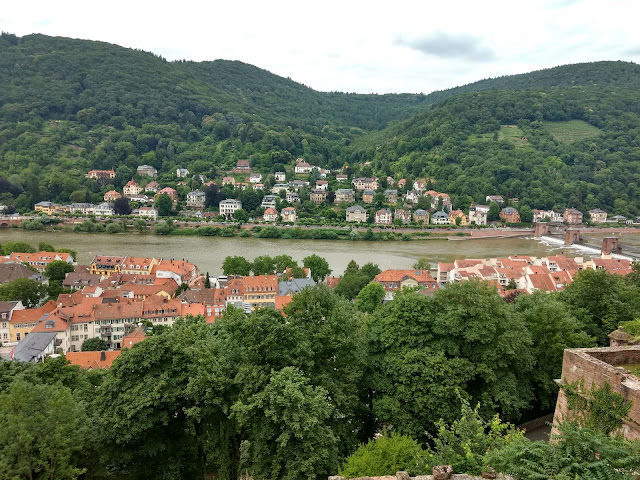 This is a view from the farthest edge of the castle. The river is not the Rhine but it carried several cruise ships.  The city below is Heidelberg, the old town  specifically.  Around the castle entrance are beautifully manicured grounds with a grotto of sorts and lots of seats. 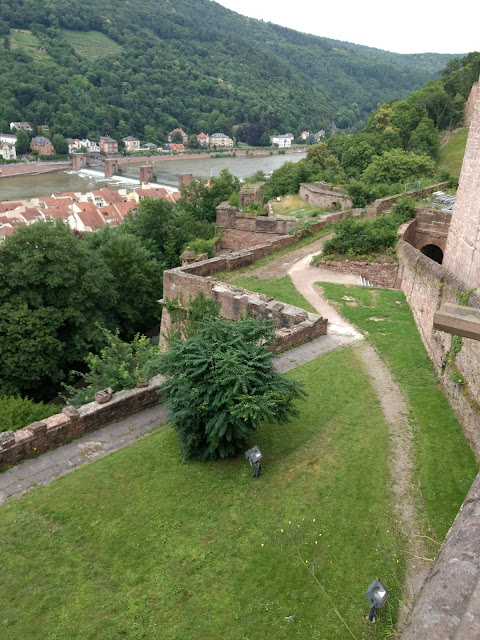 Another view looking at the river from the castle 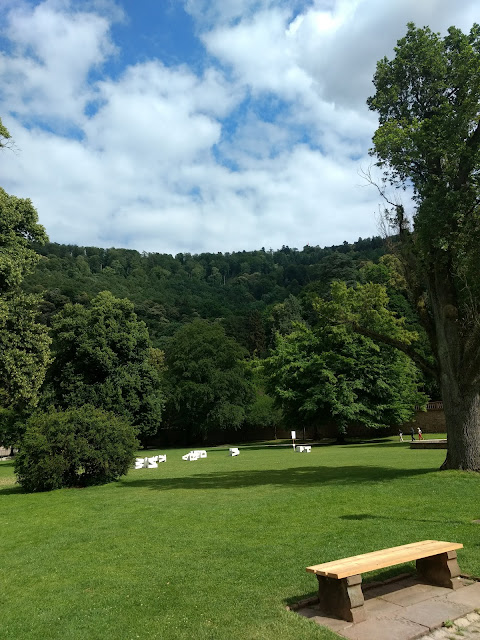 Finally, a glance at the grounds themselves.  They are taken care of regularly.  The sculptures on the lawn are actually letters strewn in no particular order.

The one thing this castle has, that I've never seen anywhere is the Apothecary or Pharmacy Museum.  it was fascinating and I'll be sharing some pictures with you tomorrow.  I hope you enjoyed these photos.  Please let me know what you think, I'd love to hear.  Have a great day.