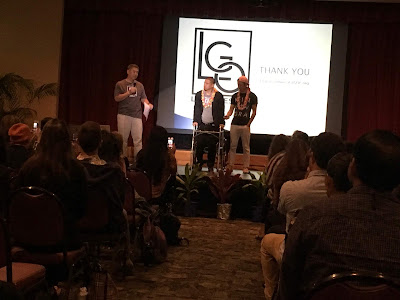 Yesterday, I attended the first day of the Kamehameha Schools Educational Technology conference.  The two keynote speakers moved the audience to the point of receiving a standing notation.

They have a unique story.  The man on the left, Arthur Renowitzky, was shot in the chest back when he was just 20 years old.  The other, Eugen Yoon, helped him in an amazing way.

After being shot, Arthur was transported to the hospital, operated on, and after almost three weeks in a coma, he regained consciousness only to discover he was paralyzed from the waist down and might never speak again.  Rather than accept the verdict, he has set a goal of learning to walk again.  He regained use of his voice first and has worked towards his goal.

Eugen heard about this goal.  He did a bit of research before discovering there is an exoskeleton capable of holding his body upright and helping him walk again.  So he set up a fund for donations and walked from the California - Mexico boarder all the way up to the Canadian boarder in order to raise the  $80,000 necessary for the suit.

Arthur has not let things slow him down.   He has established a foundation called "Life Goes On" at LGOF.org to help and encourage others.  In addition he joined a wheelchair basketball team and recently earned a place on the Golden State Warriors Wheel Chair team.  I'll talk about that more tomorrow.

Eugen on the other hand has gone his own way focusing on kindness.  After raising the money for Arthur's exoskeleton, he joined a group to help hand out food and clothing to the homeless in his town but it wasn't enough for him.  Eventually, he purchased a bunch of clothing from Goodwill and other places, washed it and opened his own store to help low income and homeless select the clothing they wanted.

He had a mirror so they could check out their look.  He greeted them, spoke with them, and let them choose their clothing.  At times, he'd take sandwiches out to the homeless to share with them.  Eventually, he started his own clothing company to make T-shirts.  All monies that can be, are reinvested into Kin Lov Gra so that the workers are paid a fair wage.  He recruits from the low income areas to help them.

I found it amazing that Eugen would walk thousands of miles to raise money for a total stranger. Both are powerful speakers and both will leave their mark upon the world.

Let me know what you think, I'd love to hear.
Posted by Lee MacArthur at 4:00 AM