This past Monday, I had the privilege of visiting the Manoa Hertiage Center, a small 3.5 acre property devoted to preserving Hawaiian plants alive for future generations.  The center was created by the Cook family to share the knowledge with others in an educational setting.  The tour was only about an hour long but there was so much to see.

In the photo below, you see a prime example of walls built without the use of mortar to keep the rock walls together. The Hawaiians were able to build so many of this type of wall and they stayed up quite well without anything to hold them together.  In addition, that back wall is actually on a hill.  The guide stated the workers first terraced the hill before filling it in with rocks to make one smooth rock wall up the back. 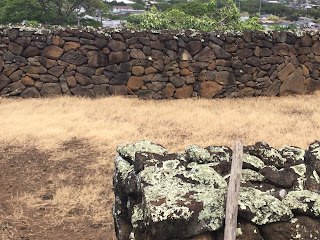 The house was originally built in 1910 in Manoa Valley when few other houses existed in the area.  The 35 acres the family owned included a place of religious significance.  Unfortunately, the stone building was located in the perfect spot but the Cook family refused to have destroy something cultural just for the house so the architect had to find another place.

The photo to the left contains a picture of the sacred place.  Even today, it is treated with respect and prayers are said out of respect for it. 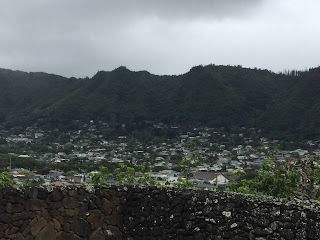 The photo to the right shows the top of the ridge where if you look closely you can see the remains of the person who harassed a woman way to much and in response the gods laid his body on top of the hill where he remains to even today. 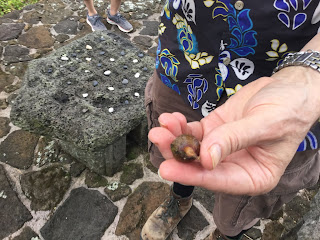 Here is a photo showing a couple different things. To the left is a game board where they played their own version of checkers with lots of jumping.  At the end of the game, the winner was the only left with a piece on the board.

The other thing to see, is the small brown seed in the man's hand.  This seed comes from a plant which produced tons of the seeds used for making soap.  You have to remove the hard outer layer. The inner part is what you boil with water to create the soap. 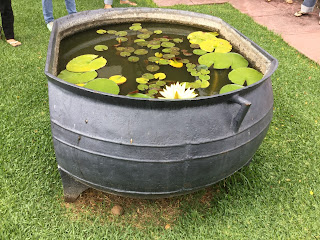 This container filled with water lilies is actually from an old whaling boat.  The container was once used to render whale blubber into oil before being sold.  This is in the backyard of the house and there is a matching one across the yard.

In addition, there is a small cannon, probably from a ship, at the top of each stairs leading down from the back yard.

The water lilies are beautiful and breathtaking.  I understand the owners of the house will donate everything inside to the foundation once it has been catalogued. 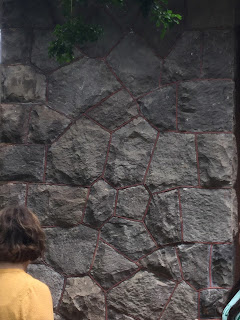 This photo is of the stonework from the Cook Tudor style house.  The unique thing about the house is that Japanese stone masons had to be hired to do this because they knew how to cut the stone so it fit together perfectly with just a bit of mortar.

Many of the Japanese who came over at this time actually worked in the sugar cane and pineapple fields but there were also many who were skilled in building the type of house these and others wanted.

The precision in which the stones fitted together absolutely blew my mind.  The rock is locally produced and beautiful.  The whole house is about 3 stories including the basement and looks as if it would be found in England, instead of here in Hawaii. 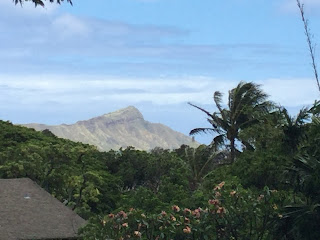 The way was so clear.  You see Diamond Head peeking through above the tree line.  Diamond Head is an extinct volcano just past Waikiki, and the zoo.

I couldn't believe the quantity of plants including the allspice tree whose leaves smell spicy, taro which is made into poi, sugar cane, and so many more wonderful plants.

They give a bit of history on the plants and some wonderful lore associated with the plants.  There was a set of two plants, each with half a flower, that were considered a pair.

It was wonderful and the first time I've been there.  They do not give regular tours, instead you can arrange for an educational tour with a group of people.  I loved it.

Let me know what you think.  Have a great day.
Posted by Lee MacArthur at 4:00 AM