Denali also known as Mount McKinley is one of the tallest mountains in the United States.  It is located in Alaska between Anchorage and Fairbanks.  On a clear day, you can see Denali from Fairbanks.  We are always thrilled when we can see it.

This past Friday, I was extremely lucky.  The routing took us so close to the mountain that I felt as if I could reach out and touch it.  Usually, planes do not end up as close as they did that day.  As soon as I realized I could see the mountain so clearly, the iPod came out and multiple pictures where taken.  I'm sharing a few with you today. 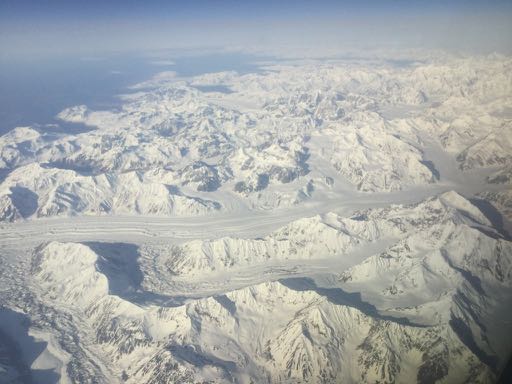 The range leading up to Denali.  Denali is the anglicized  version for the native name of the mountain.  It means "The Tall One".  If you are of a certain age, you learned the name of the mountain as Mount McKinley.  Back in 1896, when McKinley ran for office, a supporter of his began calling it Mount McKinley and it stuck because Congress recognized the name officially in 1917 many years after his assassination in 1901

When the park opens in May, they usually offer local residents the chance to drive into the park to a certain point but once the season starts, you usually take a bus to visit the visitors centers.  It is possible to get camping permits for certain campgrounds sprinkled throughout the park.  There are also a couple of lodges to stay in the park but those can be rather expensive.

There is a train that runs from Anchorage to Fairbanks that stops by the entrance to the park.  In addition, it is possible to arrange a tour by a tour company.  I've ridden one of the buses through the park and stopped at the visitor centers.  I've seen bears in the wild and found ripe blueberries inside.
It was beautiful.

I'm currently in Honolulu both working and enjoying myself.  I'll share more photos with you over the week including a wonderful Cultural Heritage site I'm visiting early in the week.  I hope you enjoyed these.  Let me know what you think.
Posted by Lee MacArthur at 4:00 AM