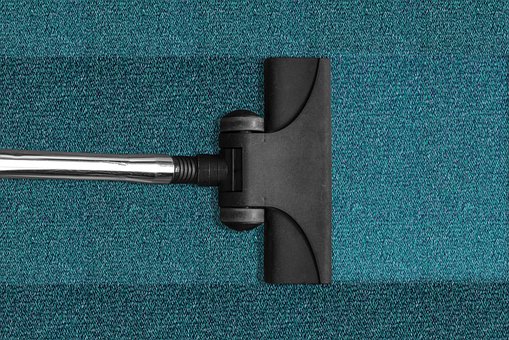 A few months back, my landlord called to let me know they were redoing the floor coverings over the summer while I'm off traveling.

They game me a choice of new carpeting or replacing it with linoleum.  I opted for linoleum because it is so much easier to clean.

I do not like carpets even though they keep the floor warmer because they never clean up properly and the dirt kind of remains at the bottom.

Besides, vacuum cleaners never seem to work quite right.  I've found they never seem to pick up all the crud on the carpet so I have to go over it several times to get it clean.  My mother had a vacuum cleaner that is older than me and worked well for a very long time but the new ones don't seem to last that long.

So you every wonder about their history? I remember seeing an episode of Downton Abbey where the maids try a new fangled thing called a vacuum cleaner and the women were afraid they'd be electrocuted by the machine.  You know the brooms as we know them today were not perfected until 1797 when someone figured out how to make one that didn't loose strands or fall apart.

By 1858, patents were being granted for carpet sweepers which were nothing more than a system of cranks and pulleys designed to push dirt around into containers.  At this point, it was still a manual system.  Two years later, someone added air circulation via bellows to improve suction but it was still manually operated.

Within ten years, another person added a fan to an upright version to improve suction and air flow the inventor sold for $25 but it had a hand crank and was much harder to use than a broom so it didn't sell well.   Come 1898, someone got the bright idea to create a gasoline powered machine that used blasts of air to move the dust into a container but it was the size of a car.  A gentleman by the name of Booth tinkered with this design making it suck the dirt up instead of blowing it.  He called it the "Puffing Billy" which was huge.

In 1902, Booth was paid to use this machine to clean Windsor Palace for the upcoming coronation.  It appears, the machine was on a carriage with hoses almost like those trucks with hoses that are brought into the house.  With a bit more tinkering, Booth was able to adjust the machine so hotels, buildings, etc to set up the machine in one room, creating a central vacuum system.  Unfortunately, only the rich people could afford it.

But a 60 year old janitor in Ohio took a broom, pillowcase, and an electric motor, tinkered and crated the first motorized cleaner.  He patented it, found investors to begin making the machine but even after mortgaging his home, he went to a satisfied customer Susan Hoover.  In 1908, her husband purchased the patent, researched the market, set up door to door salesmen and the newest version of vacuum cleaners began hitting homes and became a success.

Over the years, vacuum cleaners have increased in amps, rotations, and such but overall have not really improved since the early years but they have gotten smaller, more portable, and easier to use. In addition, other companies have sprung up to produce vacuum cleaners.

Oh, at one point, people referred to vacuuming as "hoovering" because hoover was the brand first sold.

Let me know what you think, I'd love to hear.  I still prefer bare floors because I don't need anything fancier than a broom or mop to clean.  Have a great day.