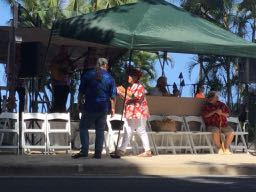 The parade began at 9:00 AM by the Iolani Palace.  I was way down in Waikiki, across from Kuhio Beach Park waiting for the parade to arrive.

Turns out, I managed to find a seat across the the Hyatt Stage, manned by the director of Hawaiian knowledge from the Hyatt.

Once everything was set up, she entertained us with information on the land, hula, history, and music.

This year's parade focused on the land.  Originally, the land in Waikiki was owned by the ruling families but some of it was sold off.  Other land was held in trust for future generations of Hawaiians.

It was through this, I learned the money made from the new International Market Place is being used to fund Queen's hospital.  Queens is the hospital who treats those without insurance so this is a way to raise monies to keep the hospital running and treat those who need it.  In addition, the land down by the Royal Hawaiian with all its shops, raises money for the Kamehameha Schools so it can continue education native Hawaiians while providing a wonderful education.

She sang lots of Hawaiian melodies, taking time to occasionally introduce people from Lanai and Tahiti.

I didn't get her name so I can't use it but she also runs a hula school at the hotel.  She had several young ladies performing.  They did a lovely job.  They also sang "The Hawaiian Suppa Man".  Its about the god Maui who created the land with his hook.

Furthermore, she managed to talk a lovely young lady into performing several hulas using some of the more traditional implements.

Sorry about the slightly fuzzy photos but its hard to get a clear photo when people are moving. 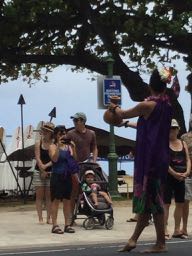 Rather than dancing on the stage, she moved out into the street so everyone could get a better view.  The stage was rather small and crowed already  so it was easier dancing with these or the bamboo ones,  and not hit anyone. 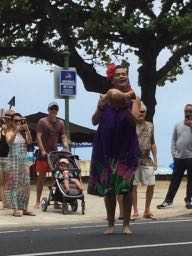 This gourd is played by the dancer.  There is a consistent rhythm played during the song.  In this case the song was about the schooner sailing ships.  Hawaiians write the words, then the music, then the hula.  Music is an important part of the culture.

It was wonderful to learn more about Hawaiian culture.  Tomorrow, I'll have pictures from the actual parade and then later in the week, I'll have entries on the Pan-pacific festival and parade.
Posted by Lee MacArthur at 4:00 AM